Posts Tagged With: bangers and mash 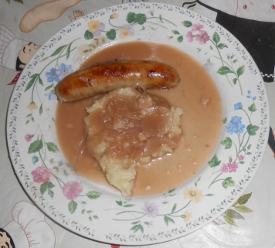 1) Rationing in Britain during World War I and immediately afterward resulted in butchers adding water to their sausages. This way they could still sell the same amount of sausages with less meat. The water in the sausages expanded during cooking and would burst open the casing with a bang.