Posted on September 22, 2012 by pauldelancey 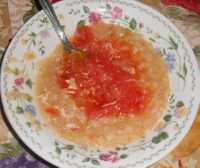 Saute the onion and leek in frying pan with butter. Cook on medium-high heat for about 5 minutes or until the onions start to turn brown.

Put sauteed onion and like in large soup pan. Add vegetable broth, the pieces from the 2 tomatoes, potato, onion, and leek.

Cook soup over low heat for about 45 minutes or until potato bits are soft. Stir occasionally. Keep lid on pot, when not stirring, to prevent evaporation of liquid.
PREPARATION PISTOU

Do you know how to peel tomatoes? I hope so. Oh c’mon, you can learn. Or your kids can learn.

Wash, seed, and peel the 6 tomatoes. (Peeling the tomatoes is much is easier when sliced into at least four pieces. Quickly peeling takes practice or you might find it faster to peel if you boil the tomato for 30 seconds first.) Chop the peeled tomatoes into small pieces. Peel and mince the garlic cloves.

Put chopped tomato and minced garlic in mixing bowl. Add Parmesan, olive oil, salt, and pepper. Mix together with fork or whisk.
Pour soup into bowls. Ladle the pistou equally over the soup in each bowl.

Serve to adoring guests. You took a long time to make this meal. So, if they are not adoring, my I suggest you let them meet your pet boa constrictor, Bernie, who has just fallen off his diet.

1) The leek is a national symbol of Wales.

2) Wales doesn’t sound so fierce, does it?

4) Just prejudice and taste, I guess.

5) The leek stores its energy in its leaves. People, being leafless, store energy elsewhere.

6) Nero ate lots of leeks when he was Emperor.

7) Within a year of Nero’s death, Galba, Otho, Vitellius, and Vespasian sent their legions fighting toward Rome in a bloody effort to become Emperor and eat all the leeks they could ever want.

8) There are a lot of sites listing fun facts about leeks. It is a happening vegetable.