Posted on September 3, 2012 by pauldelancey 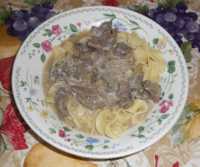 Prepare noodles according to directions on package or boil for 7 minutes or until noodles are tender. Drain water from noodles with colander.

Use heat vision superpower, or even burner, to melt 3/4 teaspoon butter in another saucepan. Add olive oil. Add sirloin squares and onion. Use medium-high heat to quickly brown sirloin and onion. Combine sirloin and onions with the above sauce. Cover and cook on low for 10 minutes.

If you are pressed for time, pans, or space, you can instead add all ingredients at once to one pan. You still need to be diligent about stirring. You might want to taste the mixture as you add sour cream since you might prefer to use more or less than is specified here. Also, more cream makes a richer sauce, while less saves calories.

I would like to stress again: cook with what’s handy. Ground beef substitutes for sirloin tip, chicken broth for beef broth and bouillon for broth, and most pasta for egg noodles.

Remember, you are not only a great chef, but an adventurer and explorer as well. Excelsior!

1) My first attempt at stroganoff came from a recipe which mistakenly substituted tablespoons of salt for teaspoons of the same. Ugh.

2) My favorite author in Middle School was Jules Verne. In addition to penning the famous 20,000 Leagues Under the Sea, he also wrote Michael Strogoff.

3) I visited the Jules Verne museum in La Rochelle, France.

4) La Rochelle was once the main seaport for herring canning.

6) My great-great-great-grandfather, Napoleon, invaded Russia in 1812. He lost. Three years later, nearly all the European powers sent him packing to Saint Helena where he died on my birthday.

7) I have never invaded Russia or any country for that matter no matter how small. In 1993 I was invited to visit Kiev, in nearby Ukraine, by a man who ran a Christian radio station there.

8) In the 1800s, Russia tried unsuccessfully to wrest control of India from Great Britain.

9) Indians speak Hindi and eat a lot of curry.

11) I attempted to make curry in grad school. Unfortunately my ability to read Hindi was, and still is, remarkably deficient. I believe I used ten to twenty times the correct amount of curry. I am only now conquering my fear of curry.

One thought on “Beef Stroganoff”