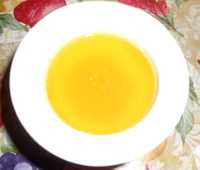 Makes two cups. Be the first on your block to do so.

1) In 1870, the French Emperor Napoleon III asked his nation to come up with a substitute for butter.

2) In 1870, the German Kaiser’s armies at Sedan captured Napoleon and over 100,000 thousand soldiers under his command.

3) This was one of the decisive defeats in the Franco-Prussian War.

4) This war gave birth to the German nation, the French Republic, and sowed the seeds for World War I, the rise of Nazi Germany, and World War II.

5) We are less sure if Napoleon III enjoyed margarine on his toast during the battle of Sedan.

6) Maybe if Napoleon had spent more time instead getting the world’s first machine guns from his nation’s arsenals to his troops in the field the war would have turned out differently.

7) But then we wouldn’t be able to have cinnamon toast with fewer calories.

8) There are pluses and minuses to every culinary advance.